How the WRP betrayed Trotskyism & The ICFI defends Trotskyism

“How the WRP betrayed Trotskyism” provides an exhaustive analysis of the betrayal of Trotskyism by the Workers Revolutionary Party. It was written between May 18 and June 9, 1986, during the first plenum of the ICFI to be held after the split with the WRP (Slaughter-Banda faction) in February 1986. With this document the ICFI has accomplished what not one of the factions claiming to represent the WRP has even attempted — an objective Marxist analysis of the historical, political and theoretical origins, development and outcome of the Workers Revolutionary Party’s break with Trotskyism.

“The ICFI defends Trotskyism” contains the major documents of the struggle within the International Committee which culminated in February 1986 with the desertion of the Workers Revolutionary Party. These documents were originally published in the internal bulletins of those sections representing the majority of the International Committee, and were thoroughly discussed among the entire membership.

Purchase both volumes together for a saving of £2 on the individual price! 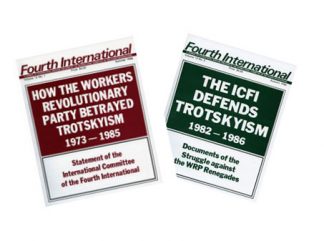 You're viewing: How the WRP betrayed Trotskyism & The ICFI defends Trotskyism £12.00
Add to basket