Karl Marx bicentenary: Socialism and the Resurgence of the International Class Struggle

2018 marks the 200th anniversary of Karl Marx, the founder of scientific socialism and author of Das Kapital. World Socialist Web Site International Editorial Board Chairman David North argues that far from being outmoded, Marx’s teachings have burning relevance for today. The historical experiences of the twentieth century – the Russian Revolution of 1917, the rise of Stalinism, and victory of fascism in Germany in 1933 – have demonstrated, as Trotsky emphasized, that the greatest challenge to mankind is the resolution of the crisis of revolutionary leadership.
The statement “Final reflections on the centennial year of the Russian Revolution” notes the worried tones of bourgeois commentators on the precarious state of world capitalism, and the danger that the October Revolution remains a beacon to the working class all over the world. 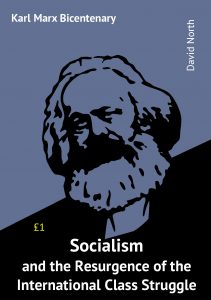 You're viewing: Karl Marx bicentenary: Socialism and the Resurgence of the International Class Struggle £1.00
Add to basket