Platform of the Joint Opposition

The 1927 program of the Joint (Bolshevik-Leninist) Opposition drew together the supporters of Trotsky and Zinoviev against Stalin and Bukharin. Submitted to the Central Committee in September 1927, the program was signed by thirteen members of the Central Committee, including Trotsky, Zinoviev, Kamenev, Smilga, Evdokimov, Rakovsky, Piatakov and Bakaev.

This detailed platform effectively demolishes the claim that Stalinism was a legitimate expression of Marxist politics and that the course which led to the demise of the Soviet Union was inevitable. It demonstrates that there existed a socialist alternative to the bureaucracy, and the political victory of the Opposition would have resulted in a very different course of development for the USSR and the international labor movement. 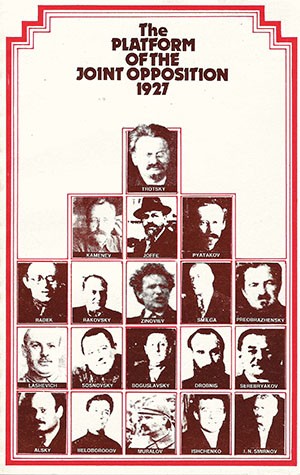 You're viewing: Platform of the Joint Opposition £5.00
Add to basket