Adopted by the Socialist Equality Party (Sri Lanka) at its 2011 founding congress in Colombo, this document depicts the 75-year struggle of the Fourth International in South Asia for Trotsky’s theory of Permanent Revolution.
The founding in 1942 of the Bolshevik Leninist Party of India (BLPI), by leaders of the Lanka Sama Samaja Party (LSSP) who had escaped British jails in Ceylon, marked a decisive advance for the Fourth International in Asia. The document traces the rise, decline and ultimate betrayal of the LSSP, which joined the 1964 coalition government of Madame Sirima Bandaranaike, abandoning the struggle to unify the Tamil and Sinhalese working class, and opening the road to the bloody 25-year civil war from 1983 to 2009. 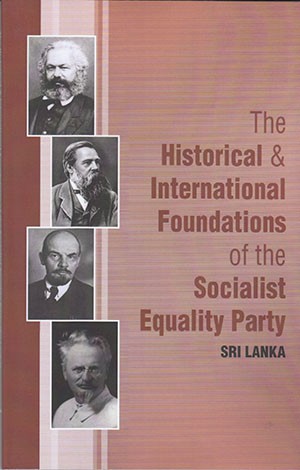 You're viewing: The Historical and International Foundations of the Socialist Equality Party (Sri Lanka) £7.50
Add to basket