Two hundred years since the birth of Friedrich Engels

Friedrich Engels was born on 28 November, 1820. Together with his friend Karl Marx, who was two-and-a-half years his senior, Engels co-founded scientific socialism. Two hundred years later, their life’s work is of burning contemporary relevance.

This essay by Secretary of the International Committee of the Fourth International Peter Schwarz was published on the World Socialist Web Site on 28 November, 2020.

Available for pre-order. Will be dispatched in April 2021.

Friedrich Engels was the lifelong collaborator of Karl Marx, and played, after Marx himself, the leading role in the development of Marxism as a science and a revolutionary program for the working class in the 19th century.

Engels’ early work on political economy and his study of the conditions of the working class in England exerted an immense impression on the young Marx and directed the latter toward his study of political economy. Between 1843 and 1848, Marx and Engels collaborated closely in the refutation of the idealist philosophy of the Young Hegelians, including in the publication of The German Ideology, which contained the first ever elaboration of the materialist conception of history.

In 1848, Engels assisted Marx in his writing of the Communist Manifesto. The Manifesto, commissioned as a program for the Communist League, established the programmatic foundations of the modern socialist movement. Engels’ intense intellectual and political collaboration with Marx, which continued throughout the latter’s 35-year exile and until his death in 1883, embraced the founding of the First International and Marx’s writing of Capital, which Engels ultimately completed after Marx’s death.

Through the writings of such works as Anti-Dühring, Ludwig Feuerbach and the End of Classical German Philosophy, Dialectics of Nature, and Origins of the Family, Private Property and the State, Engels secured the triumph of Marxism as the theoretical and political foundation of the world socialist movement. 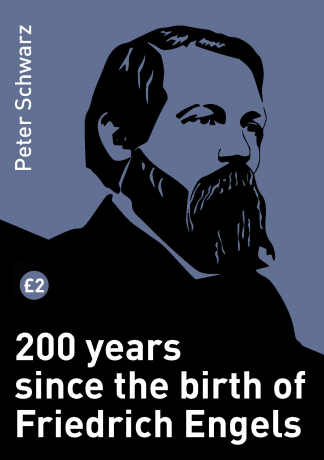 You're viewing: Two hundred years since the birth of Friedrich Engels £2.00
Add to basket