Why Study the Russian Revolution? (vol I & II)

Between February and October 1917, Russia was shaken by two monumental revolutions. The first overthrew the Romanov autocracy that had ruled the country for more than 300 years. The second overthrew the bourgeois Provisional Government and established the first socialist workers’ state in history. One hundred years after the Russian Revolution, the events of 1917, their consequences, and their lessons remain the subject of the most intense and bitter controversy.

This combined volume contains lectures and essays written by leading members of the International Committee of the Fourth International to mark the centenary of the Russian Revolution. The contents of this combined volume are unique in that they are written from a Marxist perspective. The authors stress the contemporary relevance of the lessons of 1917 for a world wracked once again by a global crisis of the capitalist system. 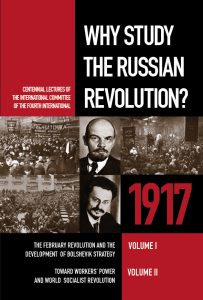